Article in Norwegian, published by VG.no 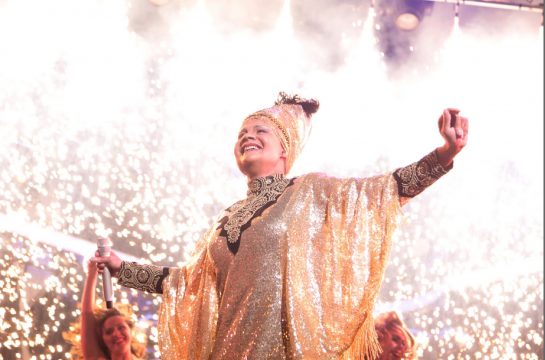 As a woman! It might not be obvious, but yes – this is in fact Alexander Rybak. It took a good deal of make up  to achieve to this result! Photo: Weit Media

Alexander Rybak (28) must master a number of challenges as a contestant in Russian “One to One”.
On the women’s day,  millions of TV-viewers get to see him in the role of Gloria Gaynor.

” I wished to do something with humor and a twinkle in the eye. Besides, I have never had on a dress before, ” Alexander Rybak told VG.

Last year was the former Grand Prix winner in the “Every time we meet”, and now he is again the current on the screen-in Russia.

In “One to One” is ten different celebrities represented, and Rybak is one of them. Each week the artists must emulate a new artist, both appearance and songwise.

So far, Alexander only portrayed male singers (including Enrique Iglesias), but this week it was the name of a woman that appeared when he pressed the program’s “artist button”: the legendary “I Will Survive”-singer Gloria Gaynor.

-I have a feeling of Gloria’s voice, and when I was little I always tried to emulate her-so now I could finally do it, “said Alexander.

And so he really did.  Photos from the program displays a Alexander Rybak who barely is to recognize-and it’s not first and foremost because of the dress.

-It had been easier to carry out the task if it was a parody, but the authors of the program have very great respect for the artists we are trying to emulate. To really go into this with skin and hair, “said Rybak.

He has a feeling that it’s not totally random that he had to be Gloria Gaynor just this Sunday: women’s day is celebrated in Russia as well, albeit in slightly different view than here.

-In Russia, it is a point to emphasize their feminiteten on women’s day, while here it is to fight for equality. We have come very far on that front in Norway-much longer than in Russia, “said Alexander.

Sunday’s program is the sixth in the series, so there’s still some time to the winner of the “One to One” will be crowned.

Participants get points for each performance, and the five that get the highest total to finally compete for audience votes in a crucial round.

Currently is third. Rybak Whether there will be more female portraits forward, remains to be seen.

-I have no idea what I have to reach in the rest of the program, but I have completed the most difficult task already,  Alexander smiles.