Article in English, published 01.11.2015 by Sons of Norway and the Viking Magazine. 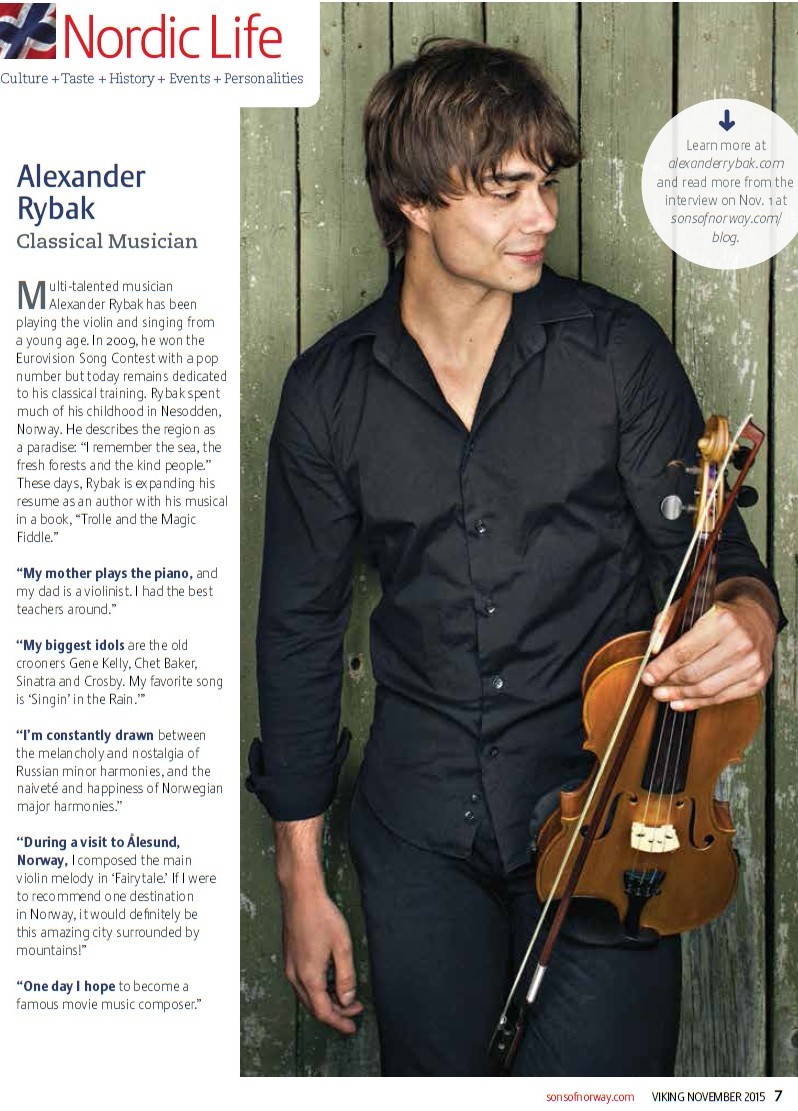 Born in Belarus and raised in Nesodden, Norway, Alexander Rybak is one of Norway’s top classical musicians. He started playing the violin and piano as a young boy and became a household name after winning the Eurovision Song Contest in 2009. In addition to being a musician and actor, Rybak is now an author. This fall the 29-year-old released a fairytale children’s book, “Trolle and the Magic Fiddle,” (Trolle og den Magiske Fela), which includes an audiobook with Rybak’s compositions that follow the story line. Read more about Rybak in Viking magazine’s November 2015 issue and see more from the interview below.

“Although Eurovision was definitely the peak of my pop career, I don’t see that evening as a pinpoint to my musical change. It was quite the opposite, actually. As a classical musician, I got bored of doing too much pop. I remember being on those tours, and thinking about how easy it is to produce pop melodies. Classical music brings me much more challenge and experience.”

“My mother plays the piano, and my dad is a violinist. I had the best teachers around. When I was 7 years old, I played a piano concerto with the Oslo Chamber Orchestra. And yet, my parents saw in me an even bigger talent for the violin. However, it was much easier and more fun to play the piano of course, because I could never play out of tune. Many years later, I see how great an investment it was to focus on violin.”

“I have played in big venues for more than 40,000 people in different countries, participated in TV shows watched by millions, played for several presidents, including President Obama, but my fondest memories are from my childhood when I played in small churches with my family.”

“In my book Trolle and the Magic Fiddle, we have the mythical creatures, the goblins and trolls (although I have made them more human than usual), but I’m also inspired by Norwegian scenery and folk music. My biggest dream is to get one of the big companies to do a movie about the book. But for now, it is a ‘musical in a book,’ as I like to say, because it’s a bundle of text, illustrations, audiobook and songs all in one.”