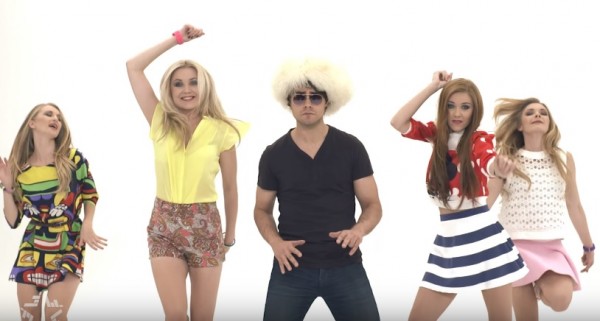 Article in English published by Wiwibloggs.com 05.12.2015

It’s taken a year, but Milki have finally dropped their sophomore single – “Lapochka”.

Back in Belarus’ selection for Eurovision 2015, they were a bunch of wholesome maidens espousing the virtues of home (“my accent stays the same”). Despite what the title suggests — “Lapochka” roughly translates as “Sweetheart” — the new release sees the ladies venture into saucier territory. My la-la-la-la indeed!

As the song opens, the girls are waiting for a long lost love to return. The video echoes the mood with the four delivering us some editorial style glamour. But they’re not going to stick around forever. In fact, the waiting ends right away. They ditch the decorum, and effectively say screw you to the man. Out come the bright colours and dance moves. Make-up and bras go flying. These girls are “bad” and want “fun” — for their baseball caps tell us so.

Here to assist with their descent into hedonism is Alexander Rybak — Norway’s Eurovision 2009 winner and the band’s mentor. Say what you will about the “Fairytale” singer, you can’t deny that he rocks the fur hat.

It’s hardly a coincidence that the track arrived in the same week as the Eurofest 2016 finalists were announced. The milk(i) turned sour last year, when the group failed to win the Belarusian ticket to Eurovision. Rybak publicly hit out at organisers, saying that he was going to take a break from it all. Could this sophisticated and modern sounding pop song represent a musical middle finger to those who snubbed “Accent”?

What do y’all make of Milki’s comeback? And who else wants Alexander’s hat for Christmas?