Press: Alexander Rybak took the stage of the Teatro Coliseo 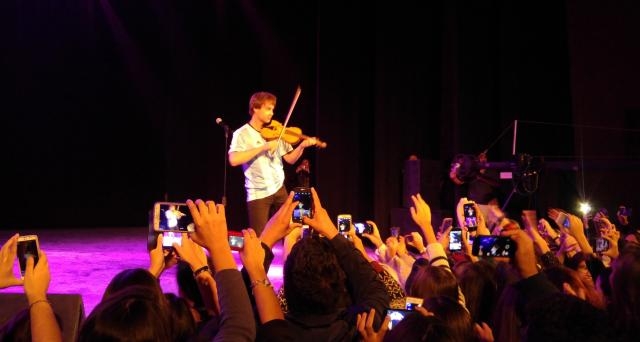 Alexander Rybak took the stage of the Teatro Coliseo

Dressed in black, with shirt and vest, and accompanied by dancers, performed “Europe’s Skies” and “Fairytale”. Then it was the turn of “Hold me , ” Julio Iglesias song that Rybak learned to sing to their Argentine fans and minutes later came the turn of “Kotik”, one of his most famous songs, whose video has more than 27,000. 000 views on Youtube.

With the presentation of the great pianist Mario Parmisano, Rybak was starting to classical segment of the concert. Alone on stage, with piano and violin played “Hungarian Suit” and “Song from a secret garden”, one of the most beautiful songs, according to Alex. Both interpretations received a standing ovation. Belarusian artist performed “Jealous” and got close to this classic segment “Libertango” Piazzola accompanied by dancers Hector Falcon and Florence Segura. It was the first time the violin Rybak played a tango. Alexander minutes later invited to the stage of the “Orchestra del Centenario”….. Read More