Article in Spanish published by mediterraneo.com 06.10.2017

The city hall firm renews the agreement with the association of housewives, while the singer Emilia Arija presents its new album ‘Imperfecta’

L’Alfàs del Pi prepares to celebrate the fifteenth edition of the Hispanic-Norwegian Days, a cultural event characterized by miscegenation and bringing together in the municipality Norwegian people very representative of the world of arts, including the singer and violinist Alexander Rybak , who will star in the closing concert, the writer Vigdis Hjorth or the violinist Arve Tellefsen .

These days, which promote a cultural exchange between Norway and Spain, will take place from 22 to 28 October. Norwegian artists, writers and musicians will share space and prominence with Spanish photographers and performers. Siegmund Watty, a Norwegian pianist and one of the promoters of the initiative, met today with the mayors of Culture , Mayte García , and Residents of Other Nationalities, Martine Mertens , to finalize details of this year’s programming.

This is, in addition, a very special year, as the fifteenth anniversary is celebrated. “They are days that stand out for their cultural character, in which writers, artists and musicians of recognized prestige meet and serve to strengthen ties between the Norwegian and Spanish cultures,” said Mayte García, edil de Cultura.

Alexander Rybak , winner of the Eurovision Song Contest 2009, “is one of the most notable stars in European pop”, says Siegmund Watty , who will not only play his biggest hits, but also show his side less known as classical violinist, with the collaboration of the pianist Stefan Ibsen Zlatanos , the singers Victoria Bakka and Pepi Lloret and of musical groups of the region.

The concert of Alexander Rybak , which will close these days on Saturday 28 October, “is arousing great interest among Eurofans, as there are people who have bought tickets from countries like Russia, Holland or Romania and also from all points of Spain, “said Watty .

The 15th Hispano-Noruega Conference will officially open on Monday, October 23 at the Casa de Cultura de l’Alfàs with a concert that will bring together young musicians from Spain and Norway who are awarded prestigious music competitions and a photographic exhibition of Marixa de Altea and Terje Enge , in which both artists reflect their particular vision of the Costa Blanca and its people, its customs, its nature, its skies and its sea, its narrow streets and whitewashed houses. 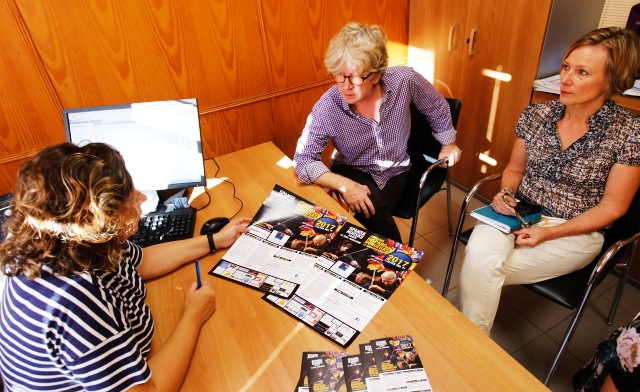 On Tuesday 24, the writer Vigdis Hjorth will star in a literary evening at the Norwegian Church of l’Albir. Considered one of the most representative voices of contemporary Norwegian literature, it has published a great selection of novels, essays and children’s books and has won prizes of recognized prestige. His novel ‘Arv og Miljo’ , which talks about incest, sparked an intense debate in Norway. Vigdis Hjorth will participate in this literary meeting with Kirsti Baggethun , former head of Culture of the Norwegian Embassy in Spain, to talk about his life and his works.

On Thursday 26 , the violinist Arve Tellefsen , one of the most emblematic and beloved musicians of Norway, will offer a concert in the House of Culture of l’Alfàs del Pi. “It is said of him that his ability to charm and connect with the public makes him one of the best violinists in the world,” said Siegmund Watty .

Finally, on Saturday 28 conclude the conference with the concert that will offer at the House of Culture de l’Alfàs, Alexander Rybak , one of the events most awaited by Eurofans who follow the singer and violinist from all corners of the world.

From the council of Residents of Other Nationalities, the mayor Martine Mertens has encouraged all the citizens of l’Alfàs and comarca to participate. “A conference aimed at residents of all nationalities, since culture and music speak in a universal language that unites us and reaches us all equally, no matter where we come from,” said Mertens .

On the other hand, the mayor of L’Alfàs del Pi, Vicente Arques , accompanied by the councilors of relations with the groups, Marisa Cortés , and equality, Genoveva Tent , signed on Thursday the renewal of the collaboration agreement which, with a a budget of € 10,000 subscribes every year the Alfasino town hall with the Association of Housewives , “one of the largest and most active groups of the municipality,” as explained the first mayor.

Arques took advantage of the signing of the collaboration agreement to “recognize the enormous work that housewives do throughout the year organizing activities for the collective itself and, above all, to help and collaborate with solidarity and social causes.” In this sense, it should be noted that in addition to the various workshops, training talks or leisure activities that housewives organize for members of the group, are one of the most active associations to collaborate with activities that both from the very Town Hall and other associations are set in motion with different solidarity purposes.

For this year, one of the novelties in the activities program of the Association of Housewives is the organization of a workshop of laughter therapy, which although it does not have an exact date of celebration, will take place soon.

In another order of things, the palentinian singer Emilia Arija will offer tomorrow Friday, October, from 21:00 pm, a solidarity concert at the House of Culture of l’Alfàs del Pi in which he will present his new album ‘Imperfecta’ , whose benefits are intended to support educational projects and development programs in America Latina.

‘Imperfecta’ is the second solo album by Emilia Arija and is composed of 14 songs that are born from collaboration with a team of professional musicians and composers, who have contributed their talent in a totally disinterested way. This collective disc has been set for social purposes, since all the benefits will go to development programs.

Emilia Arija was part, along with all her brothers, of the group Buds of Olivo. Then he created a duet with one of them, Alberto , and now he sings solo. ‘Sobre las Ruinas’ was his first solo album. He now presents ‘Imperfecta’, his new work.

Tickets for the concert cost 4 euros, if purchased early, 5 euros the same day at the box office. Children under 12 years old will be admitted free of charge.

It is an activity that has the backing of the Department of Relation with Collectives, directed by the mayor Marisa Cortés , who has encouraged all the citizens of l’Alfàs and district to attend, given that this is an initiative that highlights for their solidarity.