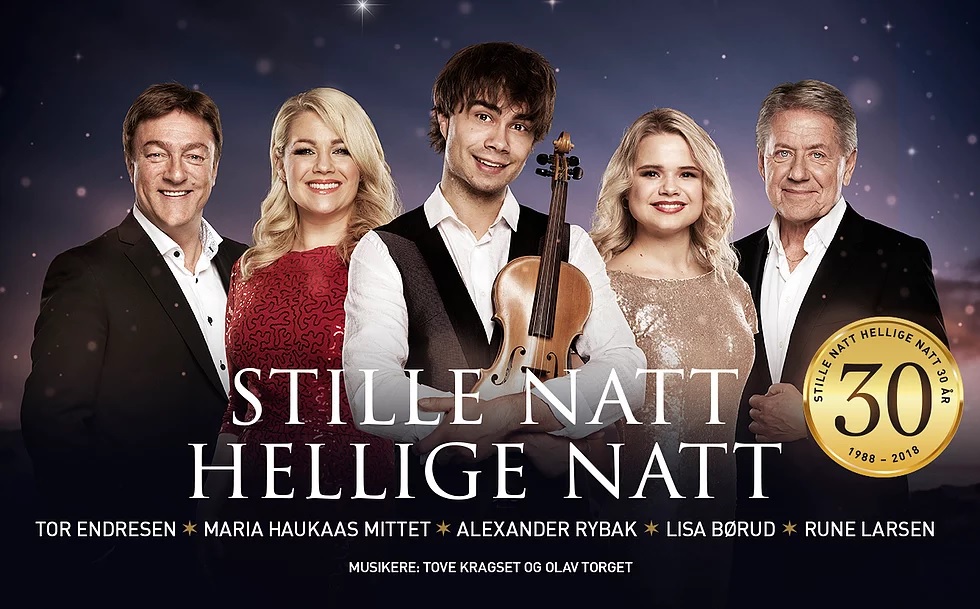 FIND ALL CONCERTS AND TICKETS IN THIS LINK

Celebrates 30 years and visits Northern Norway for the first time!

This year, It was 30 years ago since producer Tor Arne Ranghus, as the first in Norway, got the idea of arranging church-concerts with professional artists during the month before Christmas.Since 1988, more than 500.000 people have been in the audience and experienced “Stille Natt Hellige Natt” and the tour has visited more than 150 churches in Norway

“Expressed through some of the finest artists and musicians in the country, we wish, with “Stille Natt Hellige Natt”, to unite the Holiday-celebration with joy. The respect for the message and the church-room is evident and at the same time, there is a room for playfulness and joy” says the producer, Tor Arne Ranghus.

The Artists of the Year

We are proud to present a fantastic team of artists for this years’ Stille Natt Hellige Natt-tour: Rune Larsen, Maria Haukaas Mittet, Alexander Rybak, Tor Endresen and Lisa Børud. Rune Larsen participates for the 17th year in a row! It will please many audiences, that Tor Endresen is back, this year, after a few years pause. Alexander Rybak takes part for the 5th time and Maria Haukaas Mittet enters her Fourth season. This year, she will be accompanied by a young and interesting singer and artist, Lisa Børud. Lisa Børud recorded her first album at the age of 5 and became one of the big child-stars of Christian Norway. As a grown-up artist, she had her breakthrough and impressed many in last years talentshow “Stjernekamp” on NRK.

Musicians on this years tour are Tove Kragset on piano and Olav Torget on guitars.

In the Anniversary-Year, the turn has finally come to Northern Norway. “We have had countless requests from the audience, to let the tour visit Northern Norway and it has also been a strong wish from the artists, to visit this part of the country, so we are truly happy to be finally making it happen” says producer Ranghus. The premiere of the tour takes place in Tromsø Domkirke on Nov. 22nd and also Finnsnes, Narvik, Harstad, Kabelvåg and Bodø will get visited.

Alexander Rybak, born in Belarus and raised in Norway, is a musician, composer, actor and author. His big international breakthrough, came with the hit “Fairytale”, which brought him to the top in the Eurovision Song Contest in Moscow 2009. Alexander won the award “Spellemann of the Year” in 2010 and in 2007, he won the “Hedda-Award” as best newcomer in Norwegian Theater. In 2015, he published the book “Trolle og Den Magiske Fela”, which will become a new Norwegian musical. In 2018, he represented, again, Norway in the International Eurovision-Final in Lisbon.

The New Singer of the Year: Lisa Børud