Pealinn.ee: Alexander Rybak – “Pop music connects people from different countries as if they were one soul” 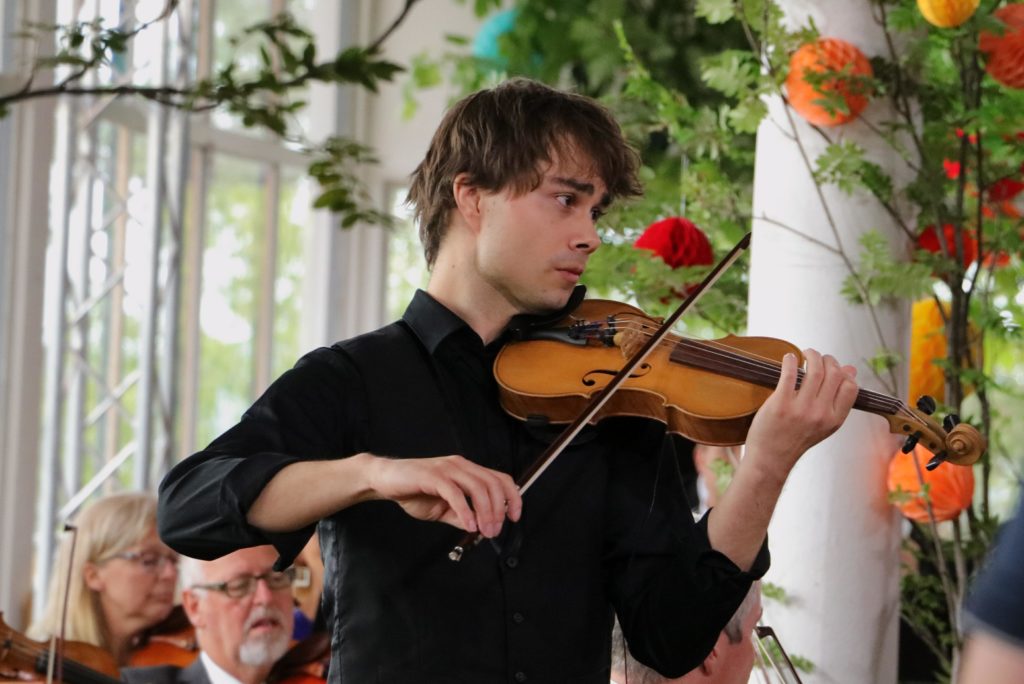 “People think that happiness is when you shine on stage, when you have huge supporters and a lot of friends,” says Norwegian euro singer Alexander Rybak.

“Yes, it can be so, but you always have to ask at what price it all comes. It only comes with great effort. And you have to like all this effort, only then can good music be born.”

Alexander Rybak, with Belarusian and Russian roots, is a two-time Norwegian euro singer and winner of the 2009 Eurovision Song Contest in Moscow. However, the musician talks about how he would like to return to Estonia again and again. This year, Rybak visited Käsmu and performed at Viru Folg, and he has also performed at the Baltic Sun Festival in Tallinn and Narva within the framework of 100 events.

You have said that Estonia is a very lovely country where Eastern Europe meets Western Europe. Is this the reason that attracts you to Estonia?

I am always very happy to perform in front of an Estonian audience, because not only one style of music is understood here, but the audience also has feelings for romantic songs. People dance and they laugh when I joke. I like such a diverse audience. When I was in Käsmu, I was the only one there with a mask. I took it off because I thought people still wanted to see my face, not just the shirt on my back. (Laughs.)

The musicians told that you went to them in Käsmu in their own tent and shared detailed tips on how to adjust the sound for each song. Not all artists make such thorough preparations.

I usually prepare for a particular performance for a couple of weeks. I also borrowed my violin, which I performed with, from my father three months before the concert. Before Käsmu, I was happy to be able to prepare in six to seven weeks. I did not want to disappoint my Estonian fans at all. Although people think I’m very spontaneous, that’s not the case at all. Everything I do on stage is prepared in details before.

You have said that you used Norwegian folk music motifs in your Eurovision victory song “Fairytale”. But next to people who are familiar with Russian folk music, something Slavic is also coming out. How did you manage to combine two different folk music?

There is a big difference not only in folk music, but in music in general, and through it, the whole attitude to life is manifested. In music, this difference is manifested through minor and major. Norwegian songs are all in major (Rybak sings in a happy way), they are fun. But Slavic songs are in the minor (humming the same way sad version). I like both.

I really like the optimism of the Norwegians, but also the Slavic melancholy. This is how most Norwegian songs are based on the idea that even though it rains all the time in Norway, I am still happy. But in Russia and other former Soviet countries it is said – “I am very happy, but it is raining outside”… (Laughs.)

However, pop music is more international and tends to be the same everywhere…

Yes, pop music is quite similar in different countries. I think it makes it more beautiful when more instruments are used, including the violin and the accordion. In pop music, we all feel the same life and soul, and we enjoy listening to its reflection. We are as connected through it in all the countries of the world.

Does that also mean that pop pushes folk music aside, it is so popular? Some folk singers in Estonia have also complained that they can no longer fight pop.

Pop music is a trend. Trends come and go. Folk music is not a trend, it is a tradition. And the tradition always persists. Folk bands may not always be so famous, this music can also be made by long-established bands. But I think a lot of artists love pop music.

You’ve also struggled with burnout. How is your health right now and what advice would you give to those who are currently suffering from it?

Now I’m over it and I’m fine. If I were to help someone who is going through bad times and who is depressed, I would first like to listen carefully to what that person is saying. It helps to understand what his problem is. Because if you just talk and give your advice, you don’t have time to listen to others or really understand them.

You said on stage that a good song must come from the heart. Is that the secret of the hit?

I just read a book about happiness. We often think that happiness is when you stand and shine on stage, when you have huge supporters and a lot of friends, that you can write songs the way you want. Yes, it can be, but you always have to ask at what price it all comes. It only comes at the cost of great effort.

The thing is, if you don’t love this creative process, nothing will come out. So it is with music writing. Especially when you do both ways and words. You sit at the table, you start saying some words, then you see that they don’t, they don’t fit anywhere. You start over.

Creating a song is a process. If you can’t stand it, you have a problem. Stand on stage and shine, it only takes an hour. But everything that precedes it is important and lasts a whole year. If you want to be happy, you must also love this difficult preparatory process. It has to be hard for you, but it’s nice.

Does that mean one hour of shining requires a whole year of effort?

Yes, you have to be able to do it all. And you have to like all this effort. Only then can good music be born.

Where do your song ideas come from? Some creative people sit at a desk for three or four hours every day and work, then quit and do everything else, but you?

These ideas can come from anywhere. If I limited my creative activity to just sitting at a table, I would limit my creation by a tenth, I can’t spend all day at the table. I like to travel around, go to the mountains, even sometimes a good idea comes to me at the toilet. I create songs everywhere.

You come from a family of serious musicians. Your father is a violinist, your mother a pianist – did they make you study violin and piano or was it your own wish?

My father is really a violin virtuoso, his wish has been for me to become a good violinist as well. So I was studying, but I wanted to. My desire was to try to come out, my father wanted me to be a top performer.

How did your parents look at your Eurovision adventures?

It was an expression of my restlessness and desire to survive in my late teens. After all, youth is still rebelling, and my rebellion was to move from classical music to pop music. I needed a little more freedom, even anarchy, probably my parents understood that. It didn’t cause any problems in college either.

What topics are hot in Norwegian society right now?

Still politics and Covid. Nature protection is also very important. In Norway, only about eight percent of the country’s territory is inhabited, the rest is untouched nature. In Norway, we are very proud that our nature is still doing relatively well.

You have previously confessed to the press that your desire is to sing a duet with Elina Nechayeva. Now it’s full, you performed last year in Brno, Czech Republic. Can you soon be heard singing together in Tallinn?

My favorite artist in Estonia is really Elena Nechayeva, we can say that we are friends. We have performed together in the Czech Republic and I hope that these performances will come to Estonia soon. I really hope that soon we can sing together in Tallinn as well. This is my dream.

What are your future plans?

I just started studying in America. I will move to the USA for a couple of years to learn to write film music. I want something new all the time. But I hope it doesn’t interfere with singing a duet with Elina.

• Alexander Rybak emigrated with musician parents from Belarus to Minsk in Norway in 1990, when he was four years old.

• One year after moving to Nesodden near Oslo, Alexander began studying piano and violin. He received his higher music education at the Norwegian Academy of Music under Professor Isaac Schuldman in 2012 – he received a bachelor’s degree in violin mastering.

• During his college studies, he also became involved in pop music, took an active part in competitions and singing competitions, became the winner of the Norwegian Eurovision Song Contest and was able to represent Norway in Moscow, where the 2009 Eurovision Song Contest took place. There, he scored 387 points for his song “Fairytale”, surpassing the previous Eurovision record of 292 points set in 2006 by the Finnish band Lordi. The song was inspired by Norwegian folk music. At the competition, he performed it together with the contemporary folk dance ensemble Frikar.

• Since winning the Eurovision Song Contest, Rybak has released numerous albums, written many songs for himself and other artists. He has performed in many European countries and in 2018 took part in Eurovision again with a self-written song about how to create a piece of music.