Interview: It’s the one and only Alexander Rybak!

Article in English published by the Norwegian American 21.06.2022 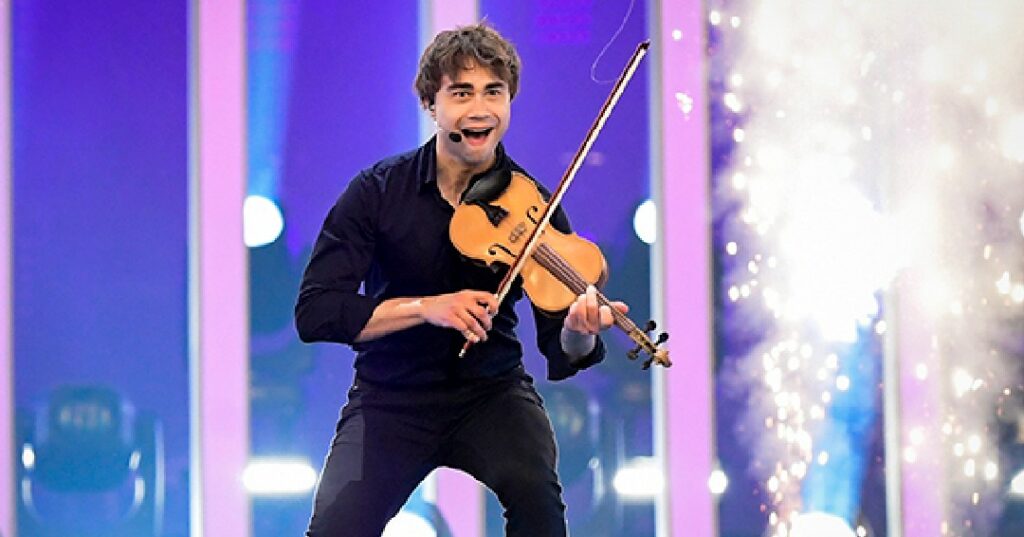 Photo: Stina Stjernkvist / TT / NTB
There were pyrotechnics and excitement on stage Alexander Rybak performed in the finals at the Eurovision Song Contest in Lisbon, Portugal, in May 2018.

It’s the one and only Alexander Rybak!

It’s not every day that you get to interview one of the biggest icons in contemporary Norwegian culture, but as I’ve said many times, sometimes this job in nothing less than fantastic. Bring out the confetti and fireworks, great balls of fire, it’s the one and only Alexander Rybak!

And that is exactly how you feel when you see and meet Alexander, simply known as “Alex” to his friends. And yes, he really is as cute and charismatic in person as he appears on stage, with a smile that would melt any frozen heart.

Recently, at the reopening of Minnekirken, the Norwegian Lutheran Memorial Church in Chicago on April 24, I got to sit down and have a relaxed, down-to-earth conversation about his amazing career, his current activities, and what he has to look forward to in the future.

Photo: Sara Johannessen Meek / NTB
In 2009, Alexander Rybak won the Eurovison Song Contest representing Norway. With his performance of “Fairytale,” he earned the highest number of points ever in the rating system then in place.

Until 2009, Alexander Rybak was relatively unknown on the world stage, but that all changed when he won the  Eurovision Song Contest  in Moscow. Representing Norway, he swept the competition with 387 points, the biggest win for any contestant in the voting system in place at the time. He was only 23, making him the youngest male winner, and he did it all performing a song he composed himself, “Fairytale.”

I remember Rybak’s triumphant return to Oslo after his win, grateful that I had arrived at Gardermoen Airport one day earlier. I was happy to have escaped the throngs of fans there to greet him, although I was curious as to who this magnificent creature might be. He was all over Norwegian  media with his irresistible smile, over the moon with his success, his own real-life fairy tale.

If you have never seen Rybak’s Eurovision performance of “Fairytale,” it’s worth having a look and listen on YouTube. For the  young artist, somehow everything came together with this performance, and it’s hard not to be drawn in by his musical wizardry.

He had written the song about a lost love (a real-life story) in about a day, but by the time it made it to the performance, several months of work went into the production.

At first, Rybak was worried when he learned that he would not be able to play his violin live at the Eurovision competitions, that the instrumental musical track would have to be pre-recorded. But in the end, it was the requirement to pre-record his violin performance that allowed the young energetic artist to defy gravity and bedazzle his audience, as he played his fiddle in positions otherwise unimaginable. The vocals were still live, infusing even more energy, and then there were special visual effects—pure magic.

The song “Fairytale” was an immediate sensation, and Rybak’s debut album “Fairytales,” was soon in the top 20 in nine European countries, hitting the top of the charts in Norway and Russia. Overnight, he became a  teen idol at home and abroad.

I asked Alexander (we were quickly on a first-name basis) what it was like to end up on top of his game so early in his career.

“I was young and thought the world was the way it was supposed to be,” he said and laughed. “I was an only child, very spoiled. It was all about practicing and getting applause; it was about entertainment. There was more of life to come …”

Alexander Rybak was born in Minsk, the capital of Belarus, in 1986. His parents, Igor and Natalia Rybak,  were both musicians, his father a famous violinist in the Minsk Chamber Orchestra, and his mother a piano teacher and music journalist.

But life was not easy in Belarus, which was still behind the Iron Curtain dividing Europe at the time. The Soviet regime was suppressive, both in terms of personal and artistic freedom. When his father was presented with the opportunity to defect while on tour in Oslo in 1991, he took the risk to find a better life. He was hidden on the estate of a prominent musical family on the exclusive Nesodden neighborhood. He managed to survive searches by the Soviet secret police, and, with time, he was granted permission to live in Norway. He became a private music tutor for the children of his sponsoring family and remained on their large estate in Nesodden.

But Igor Rybak had no intentions of abandoning his family in Belarus. Alexander shared how his father lived an extremely frugal life during the first years alone in Norway, saving as much of his salary as possible in hopes of bringing his wife and son to Norway. Eventually, the Rybak family was reunited in Oslo, where Igor and Natalia now have their own  home in Nesodden.

As a child, Alexander was immersed in the world of classical music, and his parents recognized his talent early on. At age 5, the prodigy received instruction in both piano and violin. He thought he would go in for piano, but early on, his parents realized that violin was to be his instrument.

Alexander continued his musical education at the prestigious Barratt Due Institute of Music in Oslo already at the age of 10. But while his instruction in the classical repertory was pivotal to the development to his technique as a violinist, his taste in music proved to be more eclectic. Today, he plays across all genres—classical, folk, jazz, and pop—with unparalleled artistry on his instrument. 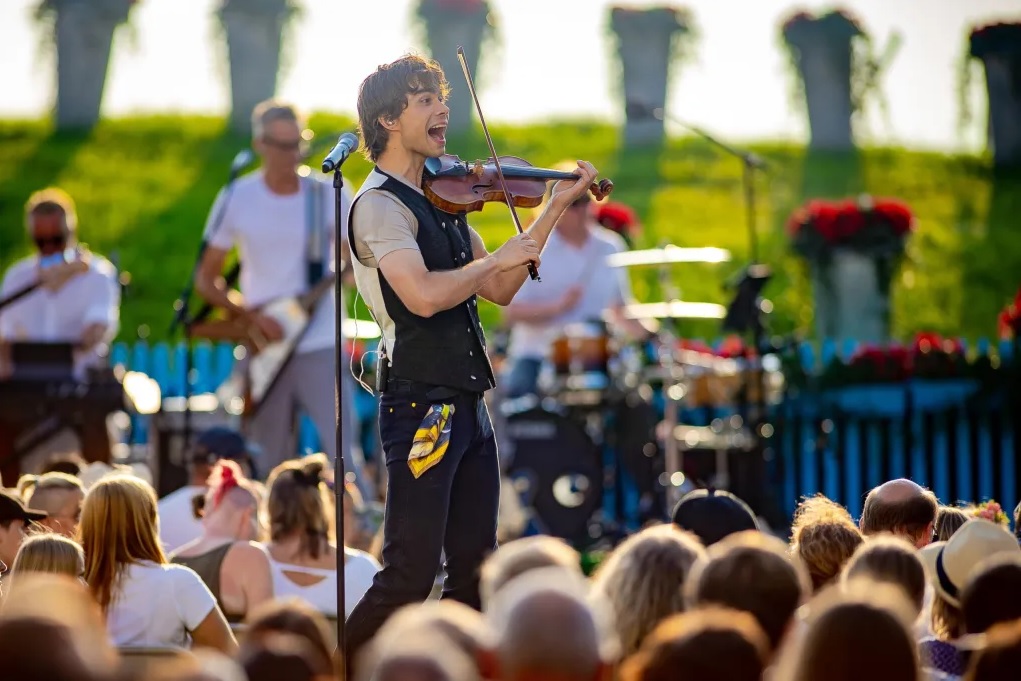 But Alexander is much more than a violinist: he is a singer, composer, pianist, and actor. The Eurovision triumph with “Fairytale” set the stage for what was to come, with performances that are “total works of art,” incorporating all aspects of his artistic talent.

Rybak has explained: “Generally, I do everything from writing folklore, children’s music, DreamWorks [an American animation studio that produces animated films and television programs] songs to arranging for symphony orchestra and making cover versions of Eurovision songs … It can be a classic piece, a pop song, a collaboration … or just a cover song, but I will always have something visual to my songs, and maybe a music video.”

One recent success that incorporates much of what Alexander is about was the musical “Trolle og den magiske fela” (Trolle and the Magical Fiddle), a children’s musical based on a book he wrote in 2015. The play premiered in Kristiansand, Norway, in 2019 and received wide critical acclaim.

An artist across borders

Because Alexander is fluent in Norwegian, Russian, and Belarusian, he has a strong following in Russia and Belarus, as well as Ukraine. It goes without saying that recent world events there have had a profound impact on his career. With so many fans in Russia, he perceives the war in Ukraine as nothing less than a tragedy.

The pandemic has also left its impact on his career, with the cancellation of so many live performances. It became time to start a new chapter, and in the fall of 2020, Alexander decided to  begin a virtual program in film score music composition at Columbia College in Chicago, and in August 2021, he moved there to continue his studies in person.

The Norwegian superstar related how it all is a bit of a risk professionally to make this shift, with significant financial sacrifices. Nonetheless, he is a risk-taker and believes in following one’s dreams. He now juggles studies, performances, and recordings, which keeps him in the public eye. He has a very strong following on TikTok, which drives a large amount of traffic to other websites where fans continue to download his music.

A meaningful day at Minnekirken

Alexander underlined how his relationship to Chicago is special to him, because it was the first place he ever visited in the United States, when he was on a world tour with Norwegian artist Turid Stanghelle when he was 16 years old. Coming back to Chicago to study felt a bit like a homecoming for him.

Hearing Alexander perform at Minnekirken for the grand reopening left a deep impact on everyone present. After all, it is not every day that you get to hear a great Eurovision champion perform up close and personal. But in the end, it was the beauty of the music that left such a strong impact.

It was at a reception hosted by Honorary Norwegian Consul Susan Meyer for visiting  New York Consul General Heidi Olufsen where Alexander learned about the celebration planned at Minnekirken.

“I had always heard about Minnekirken,” he said, “so when the opportunity to play there came up, of course, I said yes.”

His performance in the Minnekirken sanctuary made a deep impression. There were more than just a few tears shed when we heard him play a  Norwegian folk song and his rendition of Ole Bull’s “Sæterjentens søndag” that Sunday morning. It was music from the heart, coming from an extraordinarily talented Norwegian performer on a day that meant so much to so many people.

There was feeling of gratitude to be part of such a rich cultural heritage, with a new generation to carry it forth. We all look forward to hearing and seeing more from Alexander Rybak, as we all continue on our great Norwegian-American journey.

To learn more about Alexander Rybak and to listen to his music, visit alexanderrybak.com.